There’s always an opportunity to grow

Pantene garnered public traction in 2017 when it released a line of hair care products developed for black women, by black women. With the brand historically reflecting an industry-wide bias towards sleek and shiny locks, the launch of the Gold Series underscored how African American hair has been perpetually misrepresented (and under-represented) in pop culture. As one of the pillars of Pantene’s “Strong is Beautiful” campaign, the Gold Series hair care line is just one example of how the market is learning to speak to multicultural consumers. But is this method applicable across all industries?

Our America in 2018 study has a clear answer: yes! With the Gold Series, Pantene strategically tapped into what we call Exceptionalism, defined as a focus on internal uniqueness and perceived special difference that sets individuals apart from the crowd. Exceptionalism is one of four themes that anchor today’s consumer sentiment, and it especially resonates with African American (and millennial) consumers. 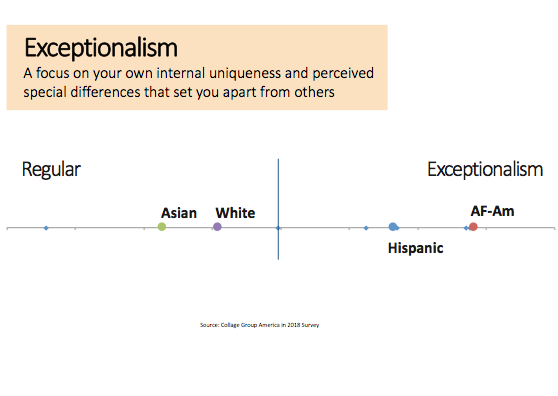 How would you describe your own personal identity? Does your answer involve your occupation or family? Or what about ethnic heritage or age? Taking a closer look at how different segments answer this question reveals what matters for different slices of Multicultural America. 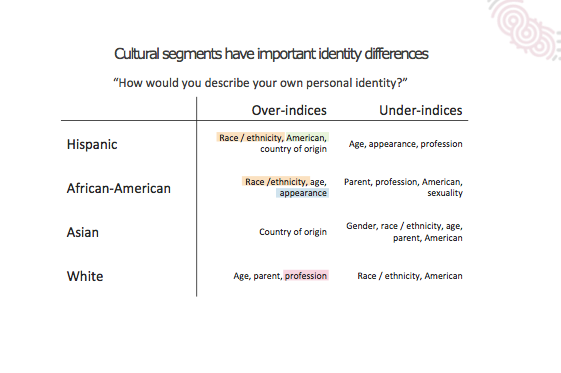 What we found supports one of the reasons why Pantene Gold Series made a ripple in the current: African Americans provided the most answers that included something about their race or ethnicity. This evidence suggests that for African Americans, race and ethnicity weigh heavily on their personal identity.

Multicultural Differences Should Be Celebrated

We live in a world where straight, sleek and shiny isn’t the most realistic hairstyle anymore (or even desired, for that matter). In fact, brands have spent years developing products that cater to our existing, varying hair textures, whether curly, thick, fine, frizzy or wavy. With the Gold Series, however, Pantene specifically celebrates the unique differences of African American hair. 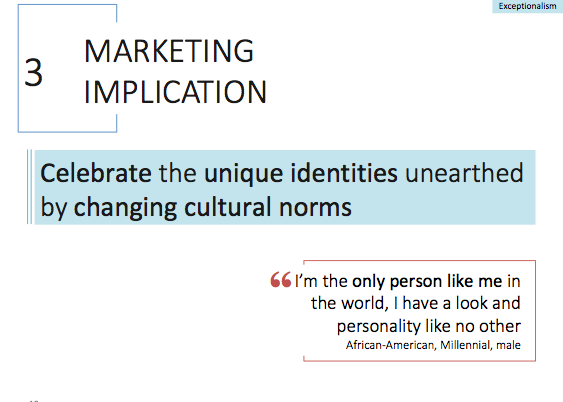 The biggest difference, though, goes on in the background. The Gold Series is truly a culturally unique product from the inside out: the collection was co-created by a group of African American scientists, stylists and dermatologists. Plus, Pantene’s new slogan, “Strong is Beautiful”, echoes the resilience, heritage and diversity of African American women.

What can other industries, even outside the realm of hair care, learn from Pantene’s campaign? On the surface, it’s easy to see that doing something different draws public attention. For Pantene, that meant abandoning a widely accepted advertising practice for one that speaks to our generation. What makes their campaign so successful, though, is the reinforced recognition that culture can’t be borrowed or bought. For this reason, the Gold Series is a “win” in our book: from the timing to the execution, the hair care line connects with a cultural population in a meaningful way, and at a critical time.

CoverGirl
Issa Rae’s collaboration with CoverGirl isn’t just another hyped-up makeup drop. In fact, it’s an integral part of the company’s mission to rebrand itself as a multicultural entity, a trend that’s been taking over the beauty industry since the beginning of 2018. As the creator of the show Insecure, it’s no wonder why Issa was chosen to be the face of the campaign: she’s authentic, and being a CoverGirl means valuing the importance of being yourself.

Adidas
Calling All CreatorsAdidas honed in on the current cultural climate in their star-studded campaign called “Here to Create”. The commercial features an impressive gathering of celebrities from different ethnic backgrounds, all with varying vocational occupancies: athletes, designers and musicians. The diversity of this cast, no doubt, was influenced by the nation’s recent multicultural shift and the need to represent a realistic picture of the people we live and work with every single day. But what makes this commercial a paragon of cultural marketing is how it interacts with the audience: the commercial explicitly calls on us to defy conformity and use our imaginations to create change. Adidas knows that at the heart of its multicultural audience lies a diverse group of thinkers who have the potential for success.

Blame Gen Z: why shopping experiences are becoming easier by the click, touch...

Unwrapped: the biggest secret behind the food and beverage industry right n...
Scroll to top