As brands pre-released their ads before Super Bowl LIII, we at Collage Group curated a selection to put through our AdRate analytics process. In the days preceding the big game, we tested 16 ads on a nationally-representative sample of American consumers.

Note that the Net score is not a simple subtraction of Backlash from Groundswell – it adjusts these scores based on the size of the “viewer pools” Groundswell and Backlash are based on.

Recently we posted an article discussing how Coke and Pepsi’s rivalry played out across ethnicity, but here we’re going to take a deep dive into how the six alcoholic beverage ads we tested on a 21+ sample (n = 948) performed. Although it was not shown nationally, we included the Jim Beam ad that had buys in New York, Chicago, and Los Angeles.

First, here is our ranking of the six ads: 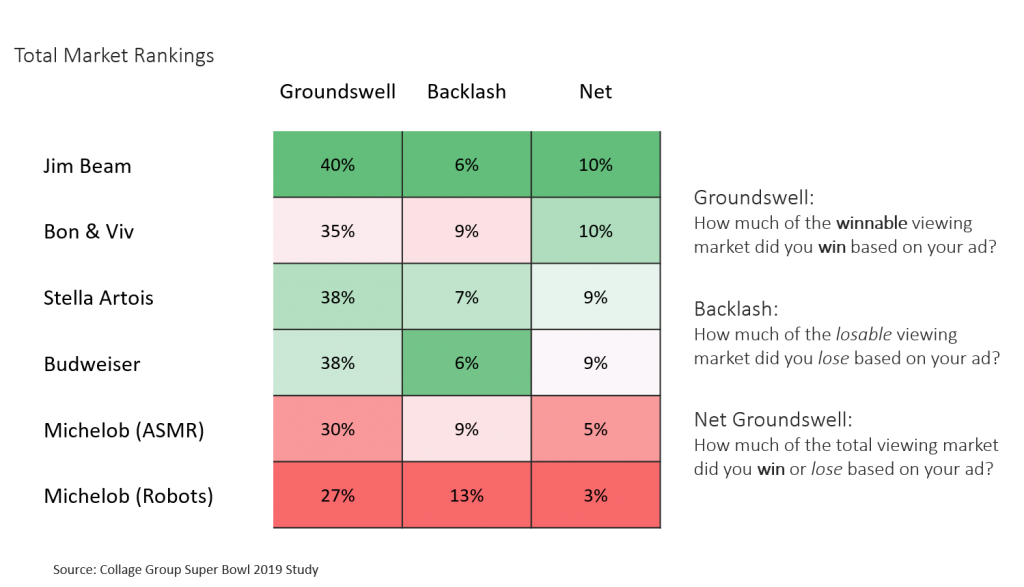 As you can see for the Total Market, Jim Beam edged out the competition with slightly higher Groundswell & lower Backlash. And despite having two very different spots, both of the Michelob Ultra ads we tested (of which every respondent only saw one) had metrics at the bottom of our list.

But since analysis at the Total Market level only reveals so much, we decided to look a little deeper. The following charts plot the six ads in terms of Groundswell and Backlash across our four ethnic segments. You can find an analysis of Groundswell drivers across these ads in the attached files. 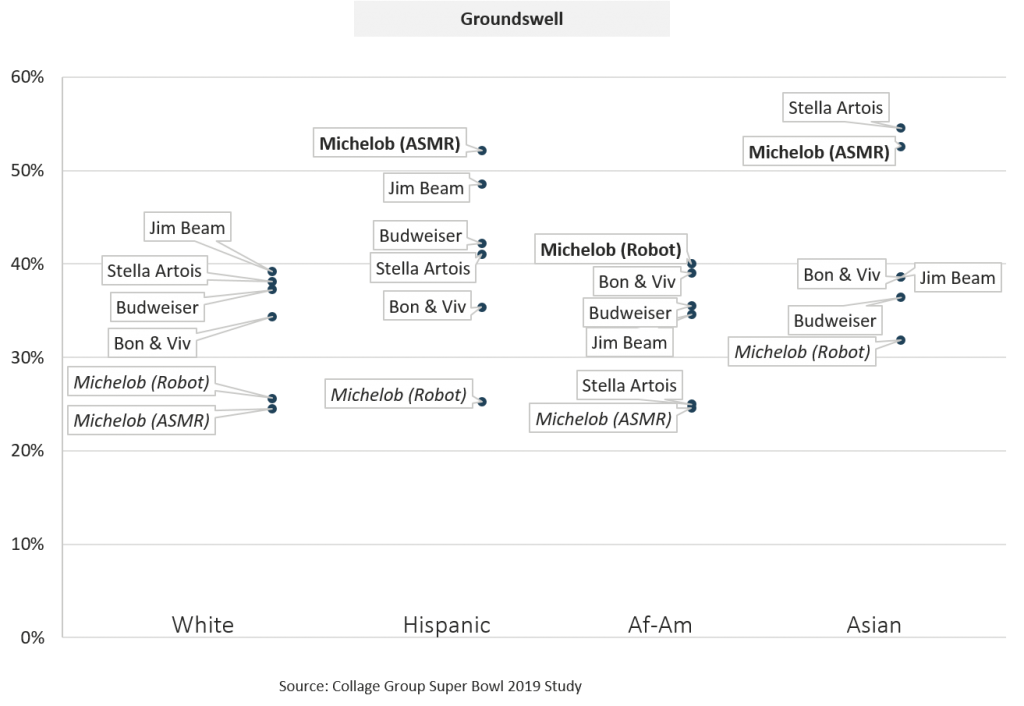 As noted in bold and italics, Michelob’s ads were the most polarizing in terms of Groundswell for every segment. Asian and Hispanic viewers responded most positively to the brand’s ASMR-inspired spot, while African-Americans enjoyed their “Robots” ad the most. But as the next chart shows, African-Americans also had the most backlash towards that same “Robots” advertisement. 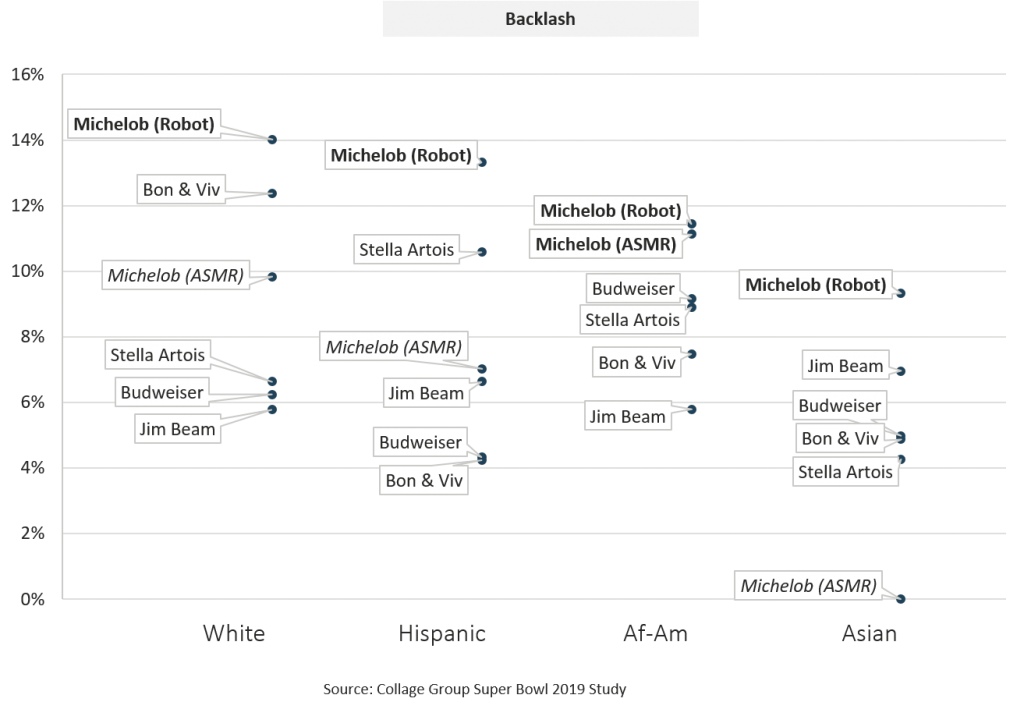 So what caused such a polarized response within the African-American segment?

Our research suggests that “high arousal” ads, such as those attempting to have their brand be the punchline of a joke, achieve either strong surprise or disgust during key branding moments. Watch “Robots” for yourself to see if it gets a rise out of you:

As you can see, the joke takes a while to land, and Michelob Ultra is the punchline – robots can’t enjoy its organic appeal, so you should! Robots & technology actually featured heavily in this year’s Super Bowl Ads – stay tuned for our insights into snack ads to see how Pringles’ execution fared across generations.

But in the graphs below, we see how this “high arousal” played out for African-American viewers. 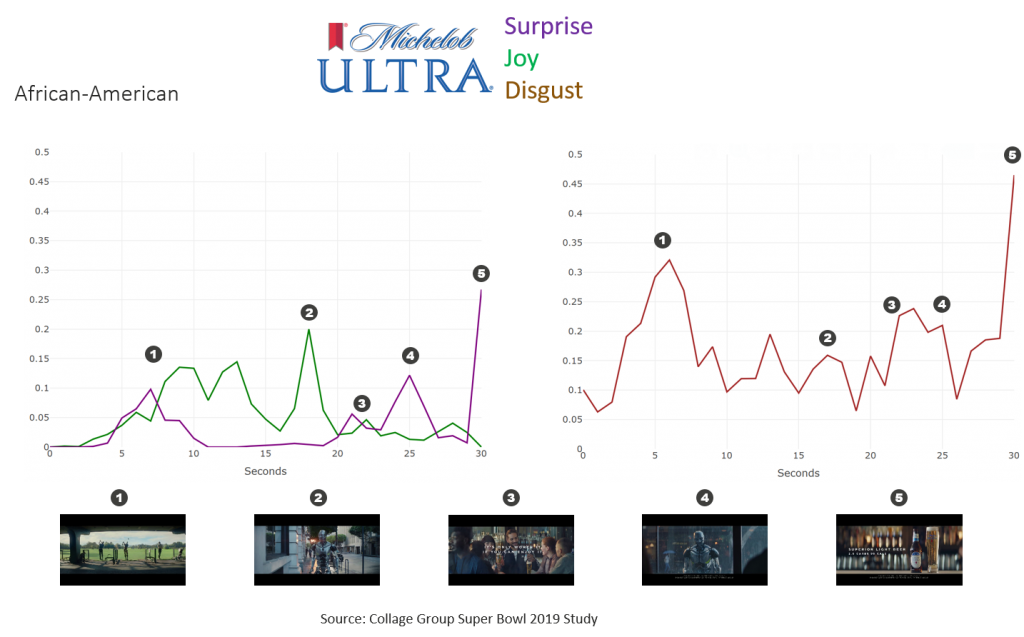 When the golfing robot sets the humorous tone (1) , you see on the left how there was a mild rise in Surprise followed by Joy – but also on the right there was a Disgust spike as well. Next, when the robot approaches the bar and the musical tone shifts (2), those appreciating the joke saw a spike in Joy. When the “it’s only worth it if you can enjoy it” line lands (3), there’s a rise in Disgust, which carries over into the final joke shot of a sad robot (4). For those appreciating the joke, though, this shot resulted in some Surprise. Finally, the Michelob branding moment (5) saw dramatic spikes in both Surprise and Disgust, depending on how African-American viewers responded to the ad up to that point.

So in short, African-American viewers either liked the humor or didn’t, and accordingly had a polarized response.

Taking a page from Budweiser’s previous campaigns featuring its brand’s history, Jim Beam’s origin story focuses on those who came together to build the brand’s first distillery. The contrast between end-of-prohibition partygoers and hard-working laborers, as well as the “raised right” tagline, suggests a moral message, which may come across as socially-charged.

Stella Artois usually comes across as a “classy” beer, and this spot both continues and subverts that narrative through two classic gender archetypes: Carrie Bradshaw from Sex and the City and ‘The Dude’ of The Big Lebowski. Chaos ensues when the two characters – one the definition of refinement, the other its antonym – decide to change up their usual beverage orders.

So what does our analysis reveal about how viewers responded to these ads? Let’s take a look:

Previous Collage work has keyed into the fact that American heritage appeals often don’t resonate as strongly with African-American viewers, so we decided to compare that segment against the White baseline. In the attached files you can also see that “pride” is only a strong driver of Groundswell for White viewers, which supports this hypothesis. The data for this ad shows that both segments had a Backlash of 6%, but Groundswell was higher for White viewers (39%) than for African-American respondents (35%). And the results of our facial tracking explain why. 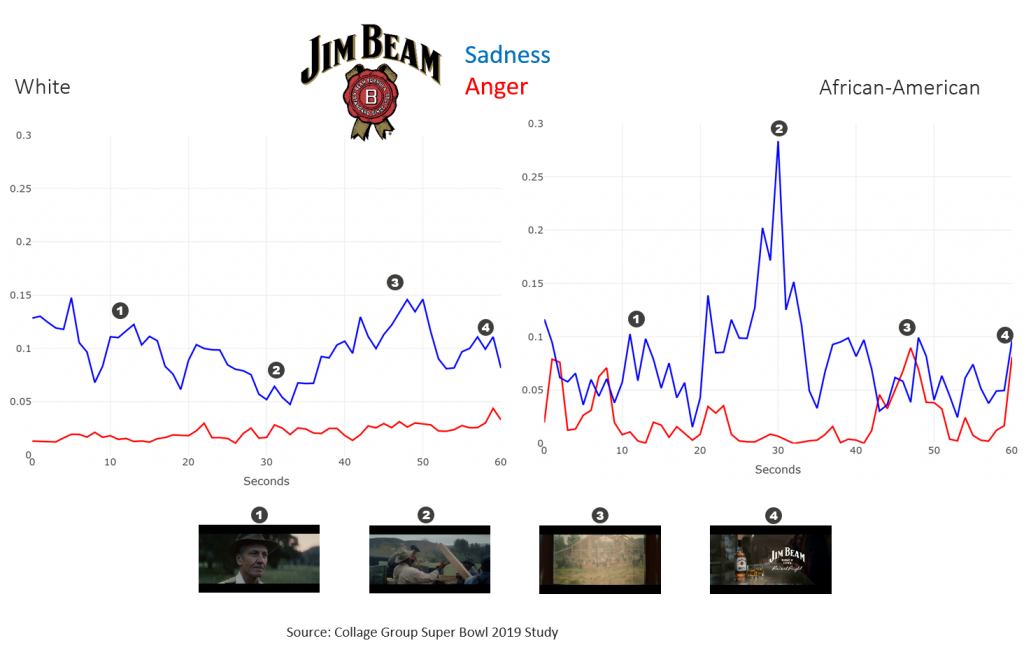 While the ad’s casting did feature people of color, there were only white people on the scene when the “raised right” slogan is first said. With that shot, the ad becomes more of a “white people’s story” with African-American characters only in the background. And our data supports this – 56% of White respondents said the best thing about the ad was its story, but only 43% of African-Americans agreed, and 10% even said the story was the worst aspect of the ad. Additionally, the ad held White viewers’ attention throughout at levels above 90%, but African-American attention dipped steadily through the ad to 78% at the end.

While Jim Beam didn’t do poorly with African-American viewers (it had the lowest backlash of the ads we tested), this analysis shows there was definitely room for improvement. The bottom line: representation, while important, only goes so far when the story isn’t about you to begin with.

Stella Artois: pop culture really tied the ad together – for women, that is

Now, let’s see how the Stella Artois ad performed across male and female viewers. Here, the hope was excitement around the characters would lead to what Collage research identifies as high-valence, high-arousal reactions – or in other words, entertainment! For both segments, the ad brought the shock factor, but women had much higher Groundswell (44%) than men (31%). And the data abides: 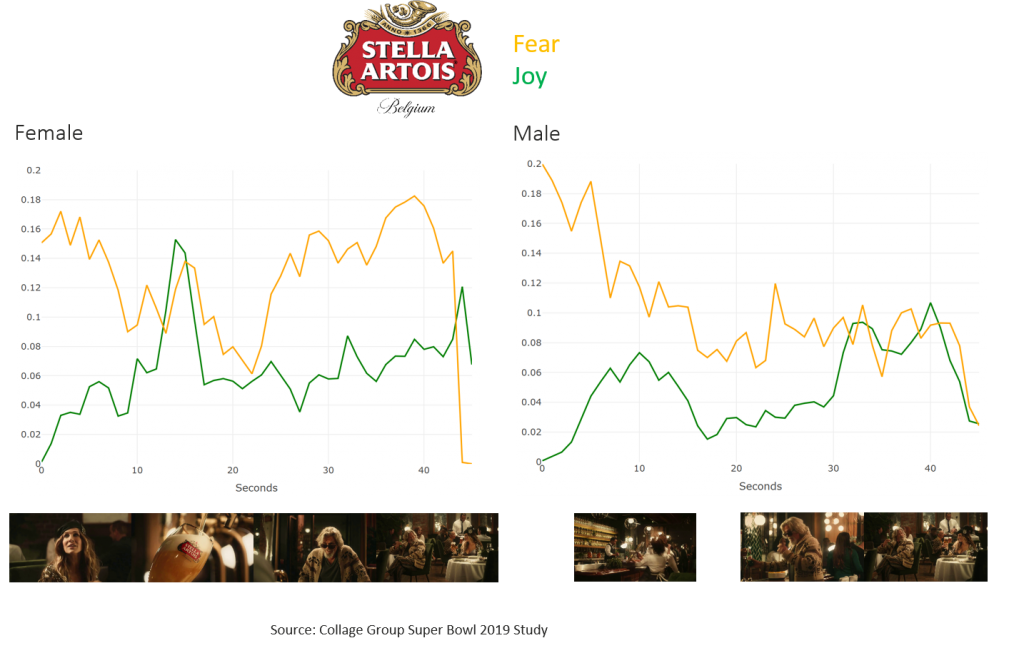 For women (on the right), Joy rose through the opening segment and peaked when Carrie got the drink she wanted. But men more enjoyed the chaos than the character, with their Joy peaking earlier. So when a ­second character entered the ad halfway through, women got a bigger and longer-lasting kick out of it. You can see after the 30-second mark that men had bigger Joy reactions to The Dude’s mannerisms and dialogue, with women also spiking at the final character interaction.

Here, the story is clear: women got the references from the start, while men – unlike Jeff Bridges himself – were caught up in the chaos of it all.

If you’re interested in more information about these ads, the other ads we’ve tested, or the AdRate product in general, please contact your Client Services Representative