As we commemorate the end of slavery this Juneteenth, let us make clear our commitments to racial justice and equality.

On June 19th, we commemorate the final enforcement of the Emancipation Proclamation. Black communities across the country gather in Juneteenth celebrations to honor the promise that all formerly enslaved people in this country would henceforth live as free citizens. But American institutions still maintain and reinforce inequalities along racial lines, such as wealth disparities between Black and White households, fewer housing opportunities being offered to Black consumers, over-policing based on skin color, and racial disparities in the health impacts of COVID-19.

Most Americans know this to be true. In our recent survey of over 2,300 U.S. consumers, 53 percent agreed that systemic racism permeates American society today. Black consumers were the most likely to agree, at 62 percent. Does that mean almost half the country is in denial about systemic racism? No – over a quarter of the total population, including more than a fifth of the Black segment, is still unsure. 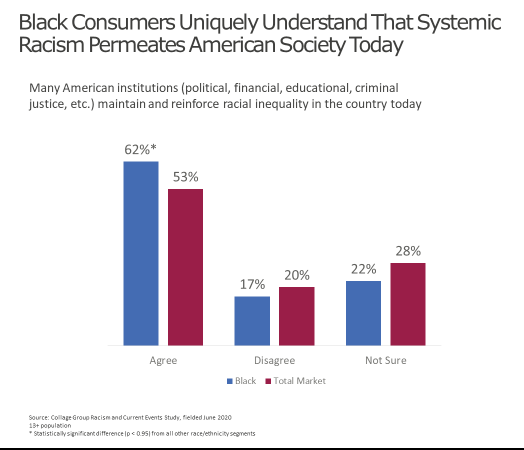 This finding suggests there is still room for brands and companies to educate both their consumers and employees on the realities of our current system.

But education is only a first step. All industries must reckon with the fact that they have for too long been part of the problem. And no one is exempt. The lion’s share of Black consumers sees room for a lot of change across various institutions and aspects of daily life to address racial inequalities. Over the past few weeks, we have seen brands take action, reconsidering mascots, cutting ties with police departments, and supporting minority-owned small businesses, to just scratch the surface. 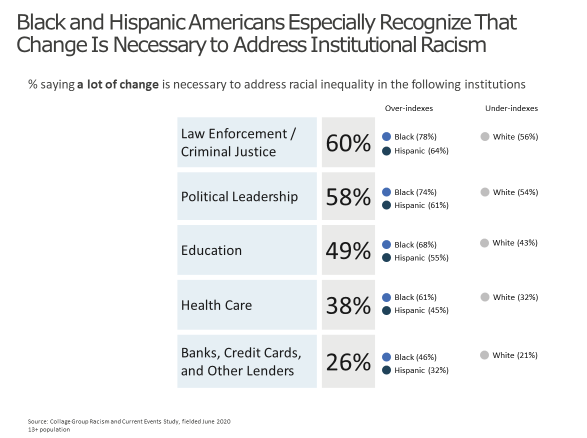 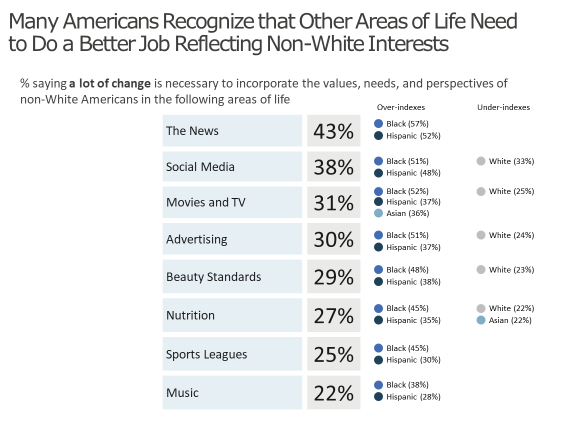 Besides wanting companies to tackle the historical issues within their own industries, Black consumers also want to see brands taking active stances against racial inequality in other spheres. Across generations, there is high support for companies leveraging their power to change government policies and support racial justice (72%), as well as taking public stands against police violence (69%). Older Black consumers, for whom the current protests may echo previous struggles towards racial justice, tend to be even more supportive of these actions. 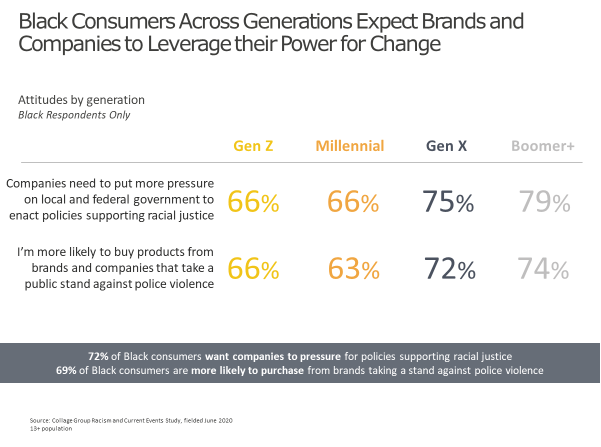 If your brand is not able to address these issues head-on, there is always room to support other organizations which take more active roles. We surveyed consumers on a selection of organizations fighting for racial justice, and we found that Black consumers see #BlackLivesMatter and the NAACP as the most prominent and highly regarded institutions focused on the Black community itself. 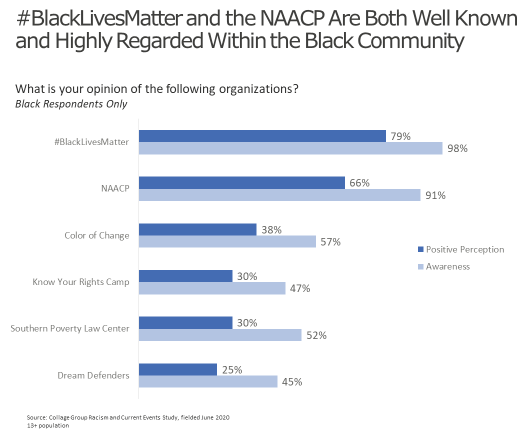 These data points provide a clearer understanding of how Black consumers perceive a variety of categories in the context of systemic racism, and some options available for you to act. But there is so much more to learn as part of your journey to becoming an agent of change. In the coming weeks, Collage will continue to release more data and external resources on consumer perceptions of racism, responses to the nationwide protests for racial justice, and actions you can take to create a more just and fair society.

CultureRate:Ad and CultureRate:Brand are major initiatives that provide a research solution to members’ mounting need for comprehensive, ongoing analysis of the cultural fluency of branding and advertising.

By 2060, Collage projects Black consumers to represent 55 million consumers, or 14 percent of the total U.S. population. Read on to learn more about this growing segment.

The LGBTQ+ & Gender consumer research program is the latest offering from Collage Group.