Fill out the form to download an excerpt from Essentials of Multicultural Marketing: Demographics and Economic Opportunity. 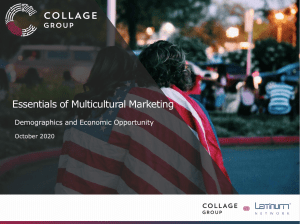 The multicultural population in the United States is transforming American culture. For the first time, the white population registered negative growth across the last five years of available data, meaning Multiculturals are now driving OVER 100% of growth and a major share of expenditure growth.

The multicultural population in America has become a major source of growth, influence and change.  The impact of this group of consumers, once an afterthought in marketing, has now become central to the success of every consumer brand in the United States.

The year 2020 could not have made this point more clearly.  From the dramatic impact of the COVID crisis, to the racial justice protests prompted by the detailed video of George Floyd’s killing, and to the extraordinary and often unexpected impact of Multiculturals on the 2020 election, brands have been thrown abruptly into a future thought to be some decades off.

Multicultural population and expenditure growth are only the tip of the iceberg.  Multiculturals, especially Hispanic and Black consumers, are also more influential on a per-person basis than other segments, with that impact is clearly revealed in the attitudes and behaviors of younger Americans across every racial and ethnic segment.

In the excerpt above, you’ll find a sampling of our most recent findings on multicultural growth opportunity, including must-have information on:

Fill out the form to learn more about the benefits of being a Collage Group member.

Who’s on My Side? Multicultural Perceptions of Polarization and Major U.S....

2020 Holiday Consumer Behavior: Thanksgiving in the Age of the COVID-19 Pan...
Scroll to top